Many thanks for visiting and reading my blog.

I have now upgraded to a fancy new website hosting a few of my photos as well as the continued blog. I hope you enjoy it.

Sir David Attenborough's 90th birthday was celebrated down here on Bird Island with a cake, a raised glass and a few episodes of Life In The Freezer. The second one in particular, 'The Ice Retreats', contains a large amount of footage from Bird Island; all the albatross and penguin shots are familiar.

Here's a few screenshots of David Attenborough on Bird Island, standing in the middle of Big Mac, one of my key work locations when I was Zoological Field Assistant for the penguins, rather than the tourist I go over there as now. In this sequence he described Macaronis as the loudest and most bad-tempered of all the penguins. At times I have described them in similar, but less eloquent, ways. 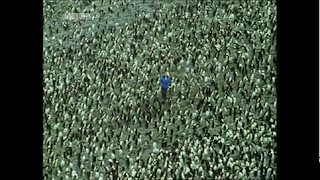 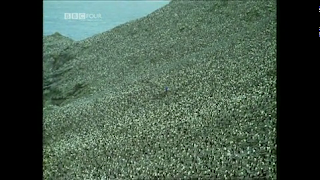 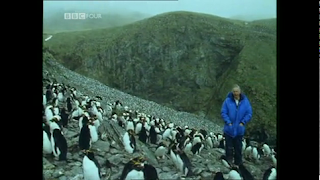 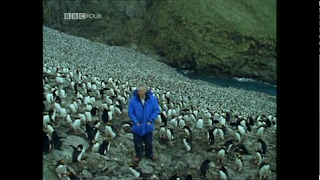 All copyright owned by the BBC and photos used without permission. Check out their series Life In The Freezer or the more recent Frozen Planet for the best impression you can get of Antarctica.

Obviously much has been said regarding David Attenborough's work and life but it is probably worth repeating that, outside of immediate family, he has probably been the biggest influence on me and many others down here. Not just the scientists studying the charismatic megafauna but anyone who grew up wanting to travel, explore and witness all the amazing sights the Earth has to offer.

Bird Island folklore says that the old jetty bog was his favourite toilet in the world. Unfortunately when the jetty was rebuilt this had to be removed from the end and placed near the main base, but it is a mark of respect that it is still standing, admittedly only used as a store currently but no one can bring themselves to tear it down. You can't destroy David Attenborough's favourite toilet!

Time is getting the better of it however and this season we have started working on preserving the unique features. On the ceiling was a painting done by a previous Station Leader, Sam, in 2010. A recreation of the roof of the Cistine Chapel with a few Bird Island natives splashed across it, my favourite being the gentoo penguin chick on Adam's lap. The painting has been taken down, cleaned up and framed, ready to take pride of place on the wall in the lounge. 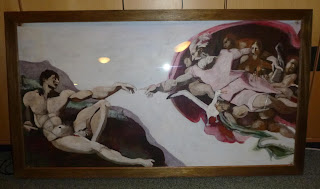 More ice than we could ever have gin for.

Since the ship called a few weeks ago we've seen winter close its icy grip on the island. Normally a Bird Island autumn is damp (like the rest of the year) with slowly dropping temperatures, but this year as the nights close in the island has frozen and become covered in snow already.

A few photos of the work we've been up to in the last couple of weeks before the ship call, particularly those days in between when we were expecting them and when they actually arrived (the weather was too rough to call so, with all the cargo being ready, I had a few relaxing days before starting all my post-call work).

Most of my work over the past month or so has been the preparation of cargo for exporting off the island. The bulk of this is waste, the vast majority of which is shipped back to the UK for recycling. Then there are scientific samples sent back to the scientists who requested them, scientific and technical equipment that gets returned for servicing, use elsewhere or sold on. Not forgetting personal cargo for those sadly leaving.

All this needs to be properly recorded; unique ID numbers, contents, size, weight, destination need to be easily identifiable for each bit. For some, such as the hazardous shipping goods (biological samples in ethanol, used aerosols, batteries) there is additional paperwork and strict rules about packaging.

This has taken a long time but it is extremely pleasing to walk round the station now and see it looking clear, right in time for stocktaking and cleaning.


The ship, the RRS Ernest Shackleton, approached Bird Island early in the week, took one look at the swell and turned round. They returned a few days later and were able to run the tender in, unloading a few bits of food, post and technical equipment with us and taking everything away.

Before the ship departed properly though we were able to get a large group of passengers ashore. These were other BAS staff, most of whom had been enjoying the cruise up from Rothera and have seen a few sights on their way. While some were found jobs to do we tried to ensure all got up to see the wandering albatrosses and a few penguins. After a summer with six other people it was a bit of a shock to be up this hill with over 20, but I hope I hid my trauma.

Finally it was time to say goodbye to those whose time to go had arrived. Waving people off from the jetty is by far the hardest thing that one has to do on Bird Island. The walk back up to station is a jumble of emotions - sad and subdued as folk leave mixed with anticipation and excitement at what's to come.


As has been pointed out to me, when I left at this time last season I didn't think I'd be here doing this again. But I'm here for another two months during which time I'll make a start on all the stocktaking...

Here's a few photos on our work with one of the most iconic Bird Island species; the magnificent wandering albatross.


Bird Island Research Station has a small staff team; no more than 10 in summer and just four over winter. We have no doctor on station though all staff receives excellent pre-deployment first aid training from the BAS Medical Unit, with one or two individuals spending a few days on the front line in an A&E department to broaden their experience.

However well skills are taught they can be quickly forgotten so we try and have a training session once a week, on an otherwise quiet evening, where we go over some aspect of rescue, recovery or medical skills. One week it could be a discussion about hypothermia, then practicing putting a stretcher together, then CPR practice with our own dummy.

Earlier in the season we sat around the table and had a serious discussion about what we would do if someone severely injured themselves in the field. Bird Island has some steep, slippery terrain and people frequently work alone. The importance of regular radio contact is hammered home, as is the necessity of always carrying spare warm clothing and an emergency aid kit. During our table-top exercise I sat down with the Emergency Action Plan and talked through the extremely useful flow chart it contains, detailing priority actions and who to contact.

With field-work calming down a bit in the last few weeks I have been on the look-out for a good occasion to put this formerly into practice. So last Friday everyone was told to be available for the afternoon, while one of the departing staff went round the beach and lay at an awkward angle at the base of a cliff. I was able to sit back and observe the response and was pleased at the calm, organised and efficient way at which those on station, particularly the upcoming winter team, dealt with the incident. A fast search party took the emergency medical bags and warm clothing and quickly located the casualty, reporting back enough detail for a second party to head out with stretcher, spinal board and other necessary equipment. On station we had someone consulting the doctor at King Edward Point and talking to Cambridge, relaying important information to those in the field.

Despite apparently serious injuries our casualty was soon back indoors, after a short stretcher ride to demonstrate how tiring it can be for those struggling along the uneven terrain. Around a cup tea we debriefed and reviewed the incident, with everyone happy and more confident in their abilities to respond to any problems, but also more aware of how difficult it can be and how self-aware they need to be in any situation.

Jerry
For the austral summer 2015-16 I will be Station Leader on the British Antarctic Survey station on Bird Island, off the tip of South Georgia. This is the same island where I spent two and a half years as a zoological field assistant, carrying out monitoring work on the penguins and petrels as well as helping with the albatross and seal tasks. I have previously worked as a warden on the islands of Skokholm and Skomer, Pembrokeshire and the Farne Islands, Northumberland.